The voyage of the Eagle Wing

The first attempt to establish an Ulster colony in America took place in 1636 when the Eagle Wing set sail from Belfast Lough with 140 men, women and children on board. The ship had been built for a group of Presbyterian ministers who wanted to emigrate to New England where they hoped to enjoy religious freedom. Frustratingly, the ship never made it to America. After eight weeks at sea severe storms forced the ship to turn back.

The migration of Ulster-Scots to America began in the late seventeenth century. A high proportion of the earliest emigrants were from north-west Ulster and in particular from County Donegal. Their reasons for leaving included economic pressures and religious persecution due to their Presbyterian beliefs. Several Presbyterian ministers were among those to depart, including Rev. Thomas Wilson of Killybegs and Rev. William Trail of Lifford. 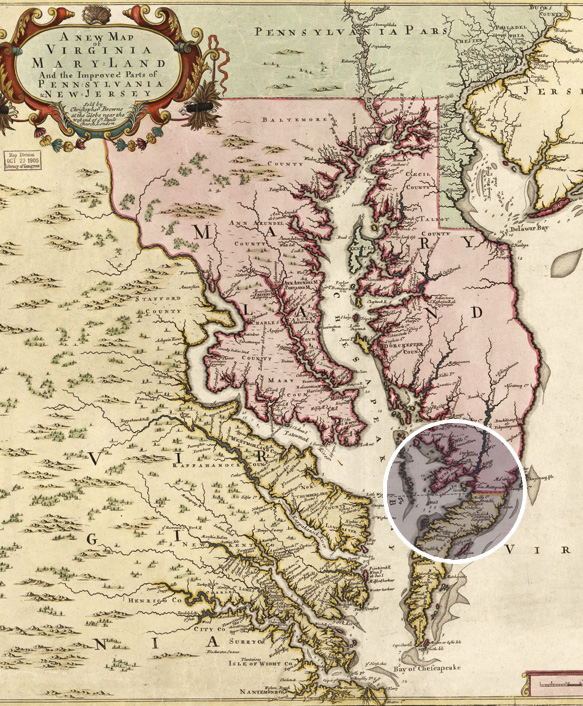 ‘A new map of Virginia, Maryland, and the improved parts of Pennsylvania & New Jersey’, 1685
Courtesy Library of Congress Geography and Map Division.

The circle contains the locations of the earliest Scotch-Irish settlements.

Many of the earliest migrants settled on the Delmarva peninsula (taking in parts of Delaware, Maryland and Virginia). In 1692, it was noted that Somerset County on the peninsula was ‘a place pestered with Scotch & Irish’ and that the new arrivals had established the linen industry. Evidence for the arrival of families from Ulster can be found in the names that they gave their farms and townships.

The use of the term Scotch-Irish

The first recorded instance of the term Scotch-Irish appears in a Somerset court record in 1689 and was part of an insult directed at Matthew Patten. Patten testified that he was assaulted by someone who said, ‘it was no more sin to kill me than to kill a dogg, or any Scotch Irish dogg’. In 1695, the Secretary of Maryland wrote that Somerset was one of the counties ‘where the Scotch-Irish are most numerous’.