Neil Armstrong was born in Wapakoneta, Ohio, and is a former American astronaut, test pilot, university professor, and United States Naval Aviator. Armstrong’s first spaceflight was aboard Gemini 8 in 1966. On 20 July 1969, as Commander of Apollo 11, he became the first man to set foot on the moon, famously observing as he did so: ‘That’s one small step for [a] man, one giant leap for mankind.’ While there is no dispute that Armstrong is descended from Border Reivers, Armstrong’s authorized biographer has challenged the hitherto prevailing view that his Reiver ancestors ever settled in County Fermanagh.
Further Reading:
James R. Hansen, First Man: The Life of Neil A. Armstrong (2005). Content supplied by G. Lucy.

Born on a farm in North Ayrshire, Dunlop was a veterinary surgeon who settled in Belfast in 1867. In 1887 he developed the first practical pneumatic or inflatable tyre for his son’s tricycle, tested it, and patented it 1888. However, two years after he was granted the patent Dunlop was officially informed that it was invalid as Scottish inventor Robert Thomson (1822-1873), had already patented the idea in France and in the USA. Dunlop became one of the founders of the rubber company which bore his name and commercial production of his invention began in 1890 in Belfast.
Further Reading:
Wilbert Garvin, Ulster Innovators of Renown (Belfast, 2006). 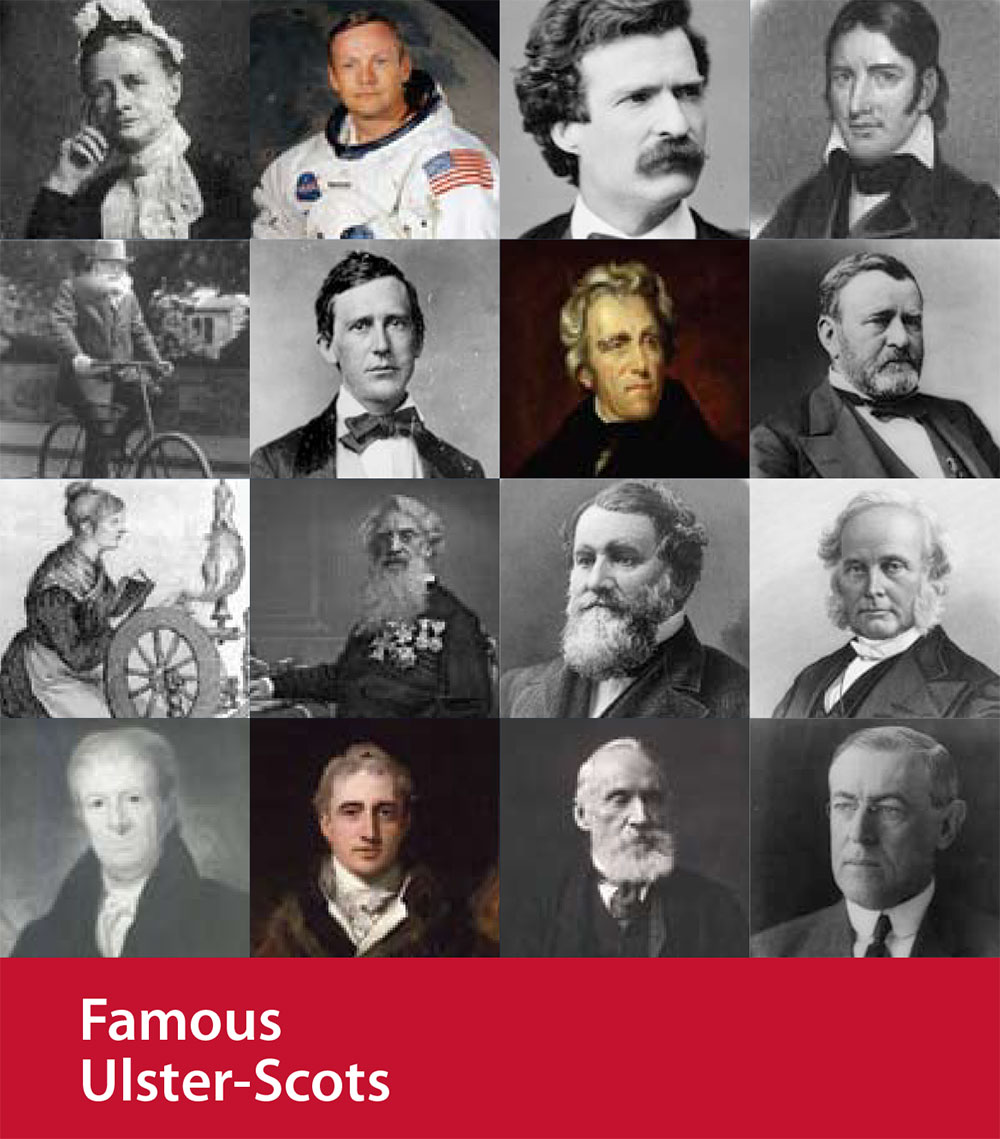 In popular legend this celebrated nineteenth-century American folk hero was known as ‘the King of the Wild Frontier’. A frontiersman, soldier and politician, he always referred to himself as David Crockett rather than Davy. He represented Tennessee in the United States House of Representatives, was an active participant in the Texan rebellion against Mexican rule and famously died defending the Alamo. Crockett told William Travis and Jim Bowie that he had travelled to the Alamo to aid them in their ‘noble cause’ and to defend ‘the liberties’ of their ‘common country’. His Ulster forbears hailed from Castlederg in County Tyrone.
Further Reading:
Michael Lofaro, ‘David Crockett’, The Encyclopedia of Appalachia (Knoxville, Tenn: University of Tennessee Press, 2006).

The military historian J. F. C. Fuller described Grant as ‘the greatest general of his age and one of the greatest strategists of any age’. If Abraham Lincoln was the Union’s political saviour, Ulysses S. Grant saved the Union militarily. Lincoln’s apt riposte to those who objected to Grant’s fondness for the bottle was: ‘I wish some of you would tell me the brand of whiskey that Grant drinks. I would like to send a barrel of it to my other generals’. The 18th President of the United States, whose ancestors came from Ballygawley, County Tyrone, was a conspicuously more successful general than he was a politician. Although a man of great personal integrity, many of Grant’s acolytes subscribed to very lax standards.
Further Reading:
Ronnie Hanna, Never Call Retreat: The Life and Times of Ulysses S. Grant (Lurgan, 1991).

James McCosh was a major figure in the religious and intellectual history of Scotland, mid-nineteenth century Ulster and the late-nineteenth century United States. In Ulster he was Professor of Logic and Metaphysics in Queen’s College, Belfast, an outstanding educationalist and opinion former. As President of Princeton, he led the college with great skill, transforming it and preparing it for university status. He represented the last great flowering of the Scottish Enlightenment. If Francis Hutcheson was the intellectual embodiment of the ‘constant factor’ between Ulster and Scotland, McCosh was emblematic of the wider Ulster-Scots epic linking Scotland, Ulster and America.
Further Reading:
David N. Livingstone, ‘James McCosh and the Scottish Intellectual Tradition’ in Alvin Jackson & David N. Livingstone, Queen’s Thinkers: Essays on the intellectual heritage of a university (Belfast, 2008).

Mary Ann McCracken, often overshadowed by Henry Joy McCracken, her more famous brother, was a formidable person in her own right. She shared her brother’s radical politics and was an admirer of Mary Wollstonecraft’s Vindication of the Rights of Women. A successful businesswoman (in the muslin trade) and a great philanthropist, in later life she became the jealous guardian of her brother’s reputation. Her final years were spent in the home of Maria, Henry Joy McCracken’s illegitimate daughter, whom Mary Ann had raised after her brother’s death. Unlike her brother, she enjoyed a long life and died aged 96.
Further Reading:
Mary McNeill, The Life and Times of Mary Ann McCracken, 1770-1866 (Belfast, 1988)

Morse was the founder and first president of the National Academy of Design in New York. He was a gifted and prolific painter of portraits and historical scenes. However, this aspect of his life has been completely overshadowed by his invention of the telegraph and the ‘Morse Code’ (which he devised for use with the telegraph). These inventions were the product of his keen interest in electricity. Morse was a profoundly religious man, a fact reflected in the first message which he transmitted between Washington and Baltimore on 24 May 1844: ‘What hath God wrought?’ His Ulster-Scots ancestors hailed from Mullabrack, County Armagh.
Further Reading:
Kenneth Silverman, Lightning Man: The Accursed Life of Samuel F. B. Morse (2008).

Cyrus McCormick’s ancestors hailed from Ballygawley, County Tyrone, eventually settling in the Shenandoah Valley, an area of Ulster-Scots settlement. McCormick designed and built the first practical reaping machine. His invention allowed farmers to harvest grain faster and cheaper than ever before. Prior to inventing the reaper, farmers could only harvest 1/2 an acre a day; after his invention farmers could harvest 12 acres a day. The prominent American politician William H. Seward observed that as a result of McCormick’s reaper ‘the line of civilization moves westward thirty miles each year’. McCormick transformed agriculture and made possible the diversification of American industry.
Further Reading:
McCormick, Cyrus Hall’, Encyclopedia Britannica (Standard Edition, Chicago, 2009).

Along with William Pitt the Younger, the Prime Minister, Castlereagh, the Chief Secretary for Ireland, was the principal architect of the British-Irish Union of 1801. At the War Office he radically reformed the British army and, against stern opposition, advanced the career of the future Duke of Wellington. Between 1812 and 1822 Castlereagh was British Foreign Secretary. He constructed the great coalitions which ultimately defeated Napoleon. At the Congress of Vienna he helped redraw the map of Europe in such a way as to lay the foundations of one of the longest periods of peace in modern European history.
Further Reading:
Wendy Hinde, Castlereagh (London, 1981).

The Belfast born Kelvin was Professor of Natural Philosophy at Glasgow University for 53 years, one of the founders of modern physics and the pre-eminent scientist of the nineteenth century. Kelvin had a comprehensive understanding of all aspects of physics: heat, light, sound, electricity. In his early days he performed experiments in electric lighting, thermodynamics and electrodynamics. He was a very talented scientific instrument designer and redesigned the nautical compass. It was Kelvin’s interest in submarine telegraphy and the laying of the first transatlantic telegraph cable in 1866, which made him internationally famous. The Kelvin scale is named in his honour.
Further Reading:
Crosbie Smith and N. Norton Wise, Energy and Empire: A biographical study of Lord Kelvin (Cambridge, 1989).

In 1791 William Ritchie, a Scot from Saltcoats, Ayrshire, came to Belfast, brought over skilled workmen from Scotland and started a shipyard. He launched Hibernia, his first ship, on 7 July 1792, just a year after his arrival. Over the next 20 years his business prospered. Hugh Ritchie, William’s brother, formed a partnership with Alexander McLaine, another Scot, and it was their firm, Richie & McLaine, which built and launched the first steam ship in Ireland. But it was William Ritchie who laid the foundations of Belfast’s great shipbuilding industry.
Further Reading:
Michael Moss & John R. Hume, Shipbuilders to the World: 125 Years of Harland & Wolff (Belfast & Wolfsboro NH, 1986).

Born in Edinburgh, Isabella Tod lived in Belfast for most of her life and became Ulster’s pre-eminent advocate of votes for women and women’s education. She campaigned for changes in the law which resulted in the Married Women’s Property Act of 1882, secured the repeal of the Contagious Diseases Act and championed the right of women to higher education. In this she was successful to the extent that she persuaded the Queen’s University of Ireland to allow girls to take examinations and to be awarded certificates (but not yet degrees). Politically, Isabella was an enthusiastic Liberal Unionist.
Further Reading:
Gordon Lucy, The Great Convention: The Ulster Unionist Convention of 1892 (Lurgan, 1995).

The 28th President led the United States into the Great War in 1917 and became the leading exponent of the League of Nations at the Paris Peace Conference of 1919. Wilson is only the second American President to win the Nobel Prize for Peace. James Wilson, his grandfather, emigrated to the United States from near Strabane in 1807. James Wilson married Annie Adams, another Ulster immigrant. Joseph Ruggles Wilson, Wilson’s father, was a Presbyterian minister of indomitable character and theological distinction, who left a lasting impression upon the character of his son.
Further Reading:
Ronnie Hanna, Woodrow Wilson: A Presbyterian President (Lurgan, 1992).