Emigration from Ireland over the last four centuries should be viewed as a single story. At different stages during these centuries either Protestants or Catholics made up the majority of the migrants but nonetheless the other group remained a significant minority.

Irish historian, Kevin Kenny, states that ‘In broad transatlantic perspective, the Presbyterian emigrants of the eighteenth century and the Catholic Irish of the nineteenth have a great deal in common and are part of the same general story.’

Modern research now seeks to overturn a previously long-held misconstruction that the Ulster emigrant experience, having for long been associated almost exclusively with the eighteenth century, is in fact and emphatically very much a nineteenth-century phenomenon. Though, importantly, eighteenth-century migration from Ulster remains significant within the overall context of migration from the British Isles.

The distorting effects of this previously held view are such that the movements of either the Scotch-Irish or Catholic Irish were told as separate stories and often meant that immigrants who were Protestant but not Ulster Presbyterians or from Ulster but Catholic were neglected or subliminally blotted out. It is well to remember that very many more Protestants departed the province of Ulster in the century after 1820 than the preceding century.

Similarly, in terms of the impact of the Great Famine in Ulster the evidence points to the existence by 1845 of a substantial and impoverished Protestant underclass left vulnerable to the effects of potato failure by the long-drawn out contraction of rural weaving and spinning. Even if no more than one in ten Famine emigrants from Ulster was Protestant, it remains the case that this total would be huge in comparison with the outflow of the eighteenth century. 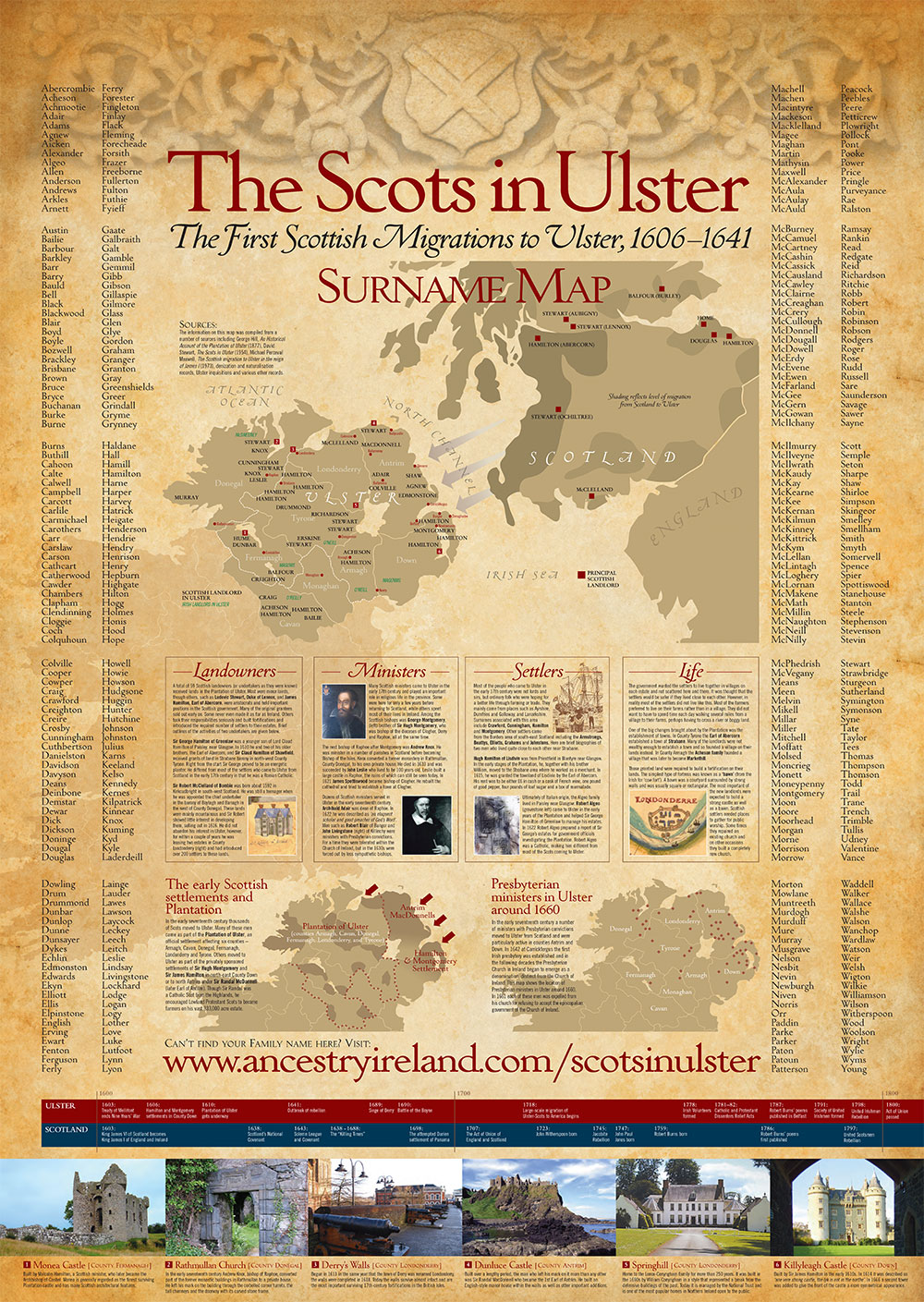 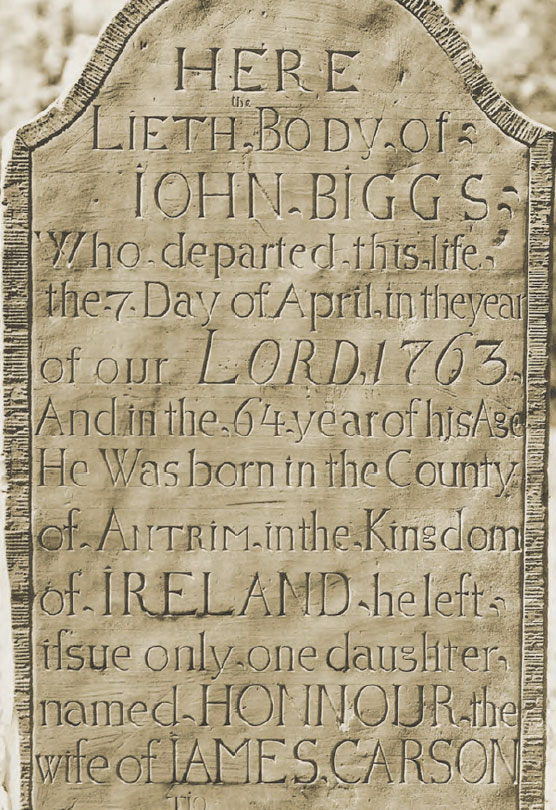 The geographical unit at the heart of this diaspora story is the historic nine-county province of Ulster. The time-frame covered is 1607 to 1960. The year 1607 (date of the Flight of the Earls) in an iconic sense, has good grounds for being identified as the origin of the modern Irish diaspora. The cut-off date of 1960 closely coincides with the emergence of significant trans-oceanic air-passenger traffic, which marked an important milestone in Ulster migration.

In mapping the flow of emigrants it is important to make a number of points: the figures are estimates arrived at from various sources, and compiled by different researchers; not all migrants were officially recorded and not all records have survived; emigration between states is only one dimension of migration, other examples could include ‘step migrants’, ‘return migrants’ and migrants moving through a variety of destinations, etc.

In the period 1607 and 1960 in terms of where the emigrants went, when they went and the relative significance of Ulster emigration in each successive period, the evidence certainly reflects the dominant popular association between Ulster emigration and the flow across the Atlantic. Just over two thirds of all migrants from Ulster in these three and a half centuries were destined for North America.

That said, the breakdown of the chronology of emigration from the province may come as something of a surprise. In terms of gross volume it emerges that just short of 90 per cent of emigrants who left the province did so in the period 1820–1960 rather than the two centuries before 1820. In light of the existing representation of Ulster emigration, particularly Ulster-American emigration, this statistic is noteworthy and challenges the dominant stereotype.

Gross numbers only tell part of the story. In order to better measure the relative significance of outward migration, it should be set against contemporary population levels. Again, the findings are instructive. During the course of the ‘long eighteenth century’ (1680–1820) Ulster’s emigration rate was just over two per 1000 of population whilst during the course of most of the nineteenth century (1820–90) the rate was between 13 and 14 per 1000 of population.

Crudely translated, this means that in relation to Ulster’s history emigration was almost seven times more significant in the nineteenth century than it had been in the eighteenth.

Whilst there is no doubting the appeal and popular romance associated with the story of Ulster’s migratory relationship with settlement in greater Appalachia, the exciting news for historians, writers, television producers and museum professionals is that the larger part of the story of emigration from Ulster is still, in large measure there, waiting to be told.

For the period 1607–80, the nine counties of Ulster accounted for a lower (but gradually increasing) proportion of the island’s overall estimated population than would be the case in subsequent centuries. The transatlantic migration figure of approximately 2,000 is to the Americas as a whole, including the Caribbean and South America. 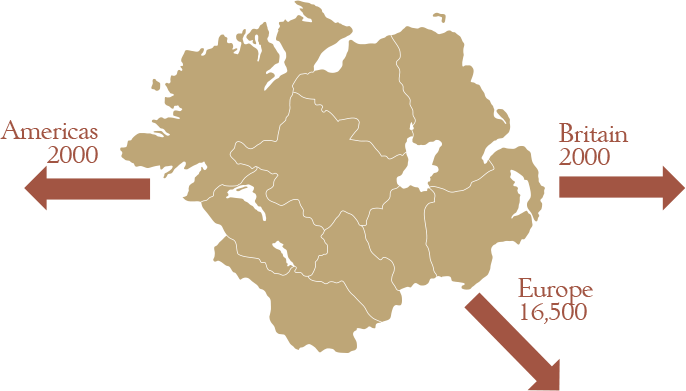 Estimates for the period 1680–1750 give a figure of 70,000 for Ulster-American emigration. In relation to transatlantic emigration the calculation is more complicated, firstly because there are other published estimates and secondly because there is a good deal of disparity between these estimates. 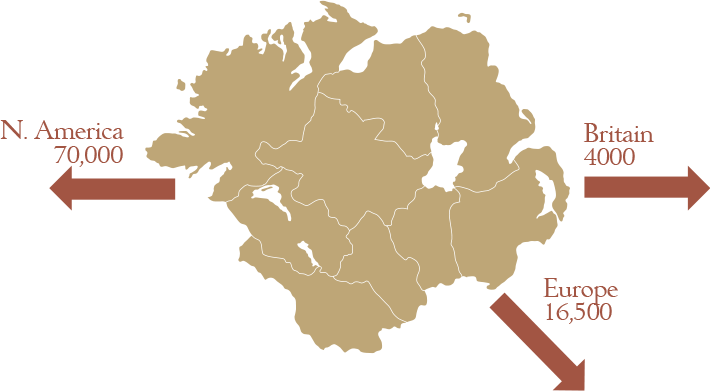 Calculating an estimate for Ulster migration to America in the period 1750–1820 incurs similar problems to the preceding period. The figure of 150,000 includes the periods 1750–1815 and 1815–20. The traditional divide used by many scholars dealing with Ulster emigration has been 1775 rather than 1750, and this adds an additional element of complication in devising an estimate for the period. 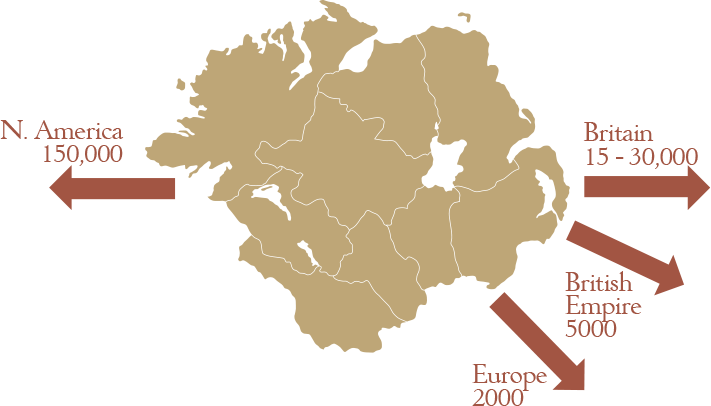 The scale of emigration from Ulster to North America in these seven decades is little short of astounding. In the three phases 1820–45, 1845–51 and 1851–90, the total estimate for Ulster migration is 1,317,000. It has been suggested that up until 1832 around half of all Irish transatlantic emigrants came from Ulster but declined fairly steadily during the following 13 years. The years between 1845 and 1851 represent a real demographic haemorrhage in Ulster. It is suggested that between the census of 1841 and that of 1851 some 291,000 migrants left Ulster whilst a further 184,000 died. For the final phase of emigration, between 1851 and 1890, the estimate for Ulster-American emigration is 760,000. 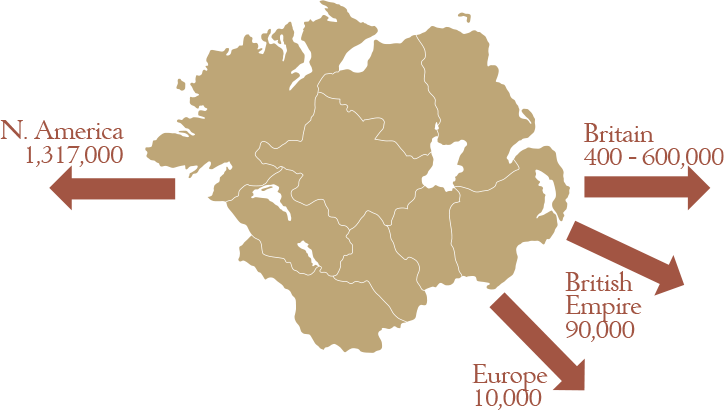 The estimated total for Ulster emigration to North America in the period 1890–1960 is 363,000. In total some 635,000 emigrants left from Ulster to all locations, not just North America. Between 1890 and 1930 around 85 per cent of Ulster emigrants ended up in North America. After 1930 this distribution altered dramatically and swiftly. Between 1930 and 1960, it is likely that close to 75 per cent of those leaving from Ulster counties went to Britain, whilst only 20 per cent crossed the Atlantic.