Robert Burns moved to Dumfries in 1791. His children attended the grammar school in Dumfries where the Rector was Presbyterian minister Rev. James Gray. Gray was the son of a shoemaker, but even as a child he showed a love of literature. He and Burns struck up a close friendship – Gray described Burns as “a kind and attentive father”.

Gray wrote that Burns “took great delight in spending his evenings in the cultivation of the minds of his children. Their education was the grand object of his life... he bestowed great pains in training their minds, habits of thought and reflection, and in keeping them pure from every form of vice.” Robert Burns Jr, aged only nine, was capable of Latin translation thanks to his father’s tuition. Gray visited Burns just days before he died – “though the hand of death was upon him, he repeated to me a little poem he had composed the day before, full of energy and tenderness”.
James Gray relocated to Edinburgh in 1801; he married the sister of Scottish poet James Hogg, the Ettrick Shepherd, and he featured in Hogg’s poem ‘Queen’s Wake’.

After 21 years in Edinburgh, James Gray came to Belfast to become Principal of Belfast Academy in November 1822, succeeding William Bruce (who had himself visited Burns in Dumfries). However, Gray’s earlier calling to church life drew him to become a deacon of the Church of Ireland. In 1826 he left Belfast Academy to become a chaplain in India. He was personal tutor to a young Indian king and translated the four Gospels into the local language. Gray died in India in 1830. 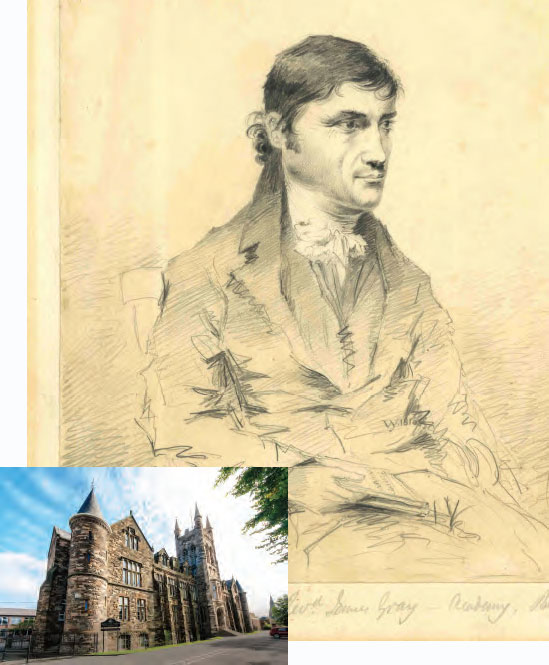 Rev James Gray portrait, courtesy of Belfast Royal Academy. The school was originally situated in Academy Street in the city centre. It relocated to a purpose-built Scottish baronial building on the Cliftonville Road in 1880.

Burns had been ill since the winter of 1795. He died in Dumfries on 21 July 1796. The Belfast News Letter and Northern Star printed obituaries. As a former member of the Dumfries Volunteers he was buried with full military honours in a corner of St Michael’s kirkyard, but with just one family member, his brother Gilbert, present.