21 July 1896 was the centenary of Burns’ death and an international outpouring of events, publications, medals, monuments and commemorations took place in Scotland, under the patronage of Queen Victoria, with the Earl of Rosebery as honorary president. People from all over the Scottish diaspora visited and participated. Glasgow and Dumfries were the focal points.

Ayrshire-born Belfast businessman and philanthropist Andrew Gibson was the only person from outside Scotland to be appointed to the Executive Committee for the proposed Burns Centenary Exhibition in Glasgow. He loaned hundreds of items from his own vast Burnsiana collection. Among the many sponsors of the Annual Burns Chronicle for 1896 was Henry Thomson & Co. Whisky of Newry.

Andrew Gibson of Ayrshire and Belfast

Gibson (1841-1931) was born in New Cumnock in Ayrshire and came to Belfast with his family in the 1880s. He lived on Cliftonville Avenue and was an agent for the G & J Burns and Cunard steamship lines. He was a man of wide interests – he was a Governor of the Linen Hall Library, became President of Cliftonville Football Club and his son played international football for Ireland. Gibson is also regarded as the father of bowls in Ireland.

A special effort was made to source further items from Ulster. In May 1896 Gibson was tasked with leading a committee in Belfast. Adverts were placed in the local newspapers inviting members of the public to bring forward Burns related items, portraits, pictures and personal relics. Other members of the committee included prominent Belfast business people, historians and academics. 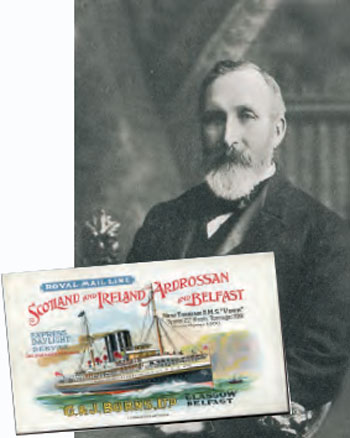 The famous ‘kailyard’ author Ian MacLaren (aka Rev. Dr John Watson) spoke at a major event at Belfast’s Grosvenor Hall. His stories of Scottish rural life were hugely popular in the late 1800s – his novel Beside The Bonnie Brier Bush sold over 700,000 copies. The Belfast press reported on the events being held in Glasgow and Dumfries. At the annual dinner of the Belfast Benevolent Society of St Andrew, this poem was quoted –

The land we left – aye to us dear
We’ve sung it lood an lang;
But hae we nae a country here
As worthy o’ a sang?

Belfast participation at the Dumfries events

In Dumfries, the Robert Burns mausoleum in St Michael’s kirkyard was bedecked in floral garlands. A huge procession and demonstration took place in the town which was attended by thousands of people. Andrew W. Stewart of the Belfast Evening Telegraph, who was President of the Belfast Burns Club, gave a short address. He was accompanied at the Dumfries events by the Club secretary, Peter Galloway, and William Henry Anderson. Stewart also commented that “the Belfast exhibits formed no inconsiderable attraction at the Glasgow exhibition”.

Gibson was one of the recipients of a centenary card from Burns’ great-granddaughter Martha Burns Thomas, featuring Robert Burns’ wax seal. Martha was by then living in County Wexford and she issued these to close family and friends. Gibson’s personal card – signed “Andrew Gibson Esqre. With Mrs Burns Thomas’ compliments, 11th Sept. 1896” – is thought to be with other Gibson items which are now held in the Manuscripts, Archives & Rare Book Library of Emory University, Georgia, USA. 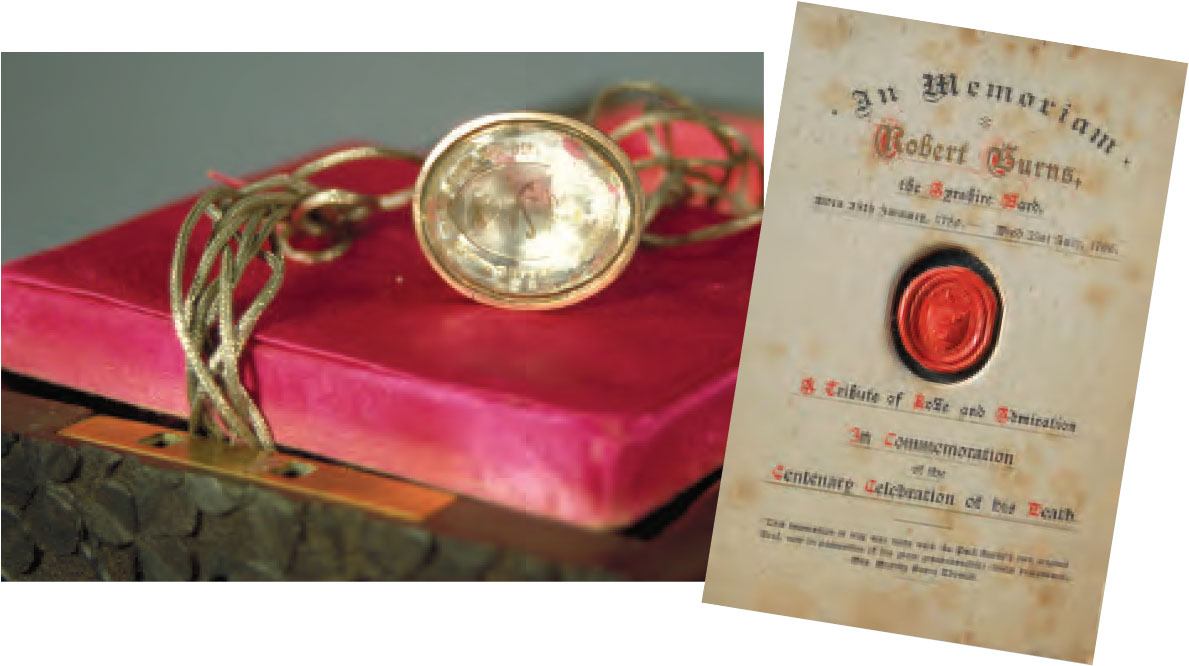