An Ulster town with an American name

A resident of Virginia, County Cavan, Sheila was a teacher before taking early retirement two years ago. She has a Certificate in Local Studies from N.U.I., Maynooth (for her work on The Origins and Development of Virginia, Co. Cavan) and plans to commence a Masters in Local Studies in 2008. She is also a qualified reflexologist and is studying for Post Grad. Diploma in Translation Studies (Irish) from U.C.G.

The town of Virginia, in the county of Cavan named after Elizabeth 1, the Virgin Queen, owes its origin to the Ulster Plantation of 1609. The town did not develop as quickly as planned during its early phase, due to the failure of the first two Undertakers, Captain John Ridgeway and Captain Hugh Culme to fulfill their patents. It is likely that Captain Ridgeway sold the lands granted to him within two years. While Captain Culme held on to these lands for a considerably longer period, he scarcely made enough progress to fulfill his contract during that time.

The lands then passed into the possession of Lucas Plunkett, Earl of Bective, a Catholic, who was later given the title Earl of Fingall. It can also be said that Lucas Plunkett along with his son, Christopher, frustrated the plans of the Government to proceed with the development of the town and its incorporation during his tenure. He was sympathetic to the rebel Irish and sided with them against the planters, during the 1641 Rebellion and the Williamite Wars of 1688 - 1691, earning him the name of 'traitor'. Consequently it fell to the earl of Bective, Thomas Taylour, later known as the Marquis of Headfort, and his successors, to fulfill the patent in relation to the development of the town in the second half of the eighteenth century and the nineteenth century - the patent which was originally granted to Captain Ridgeway in 1612.

Click on the thumbnails below to view larger versions of the images. 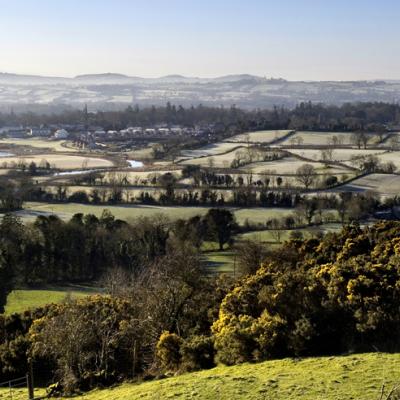 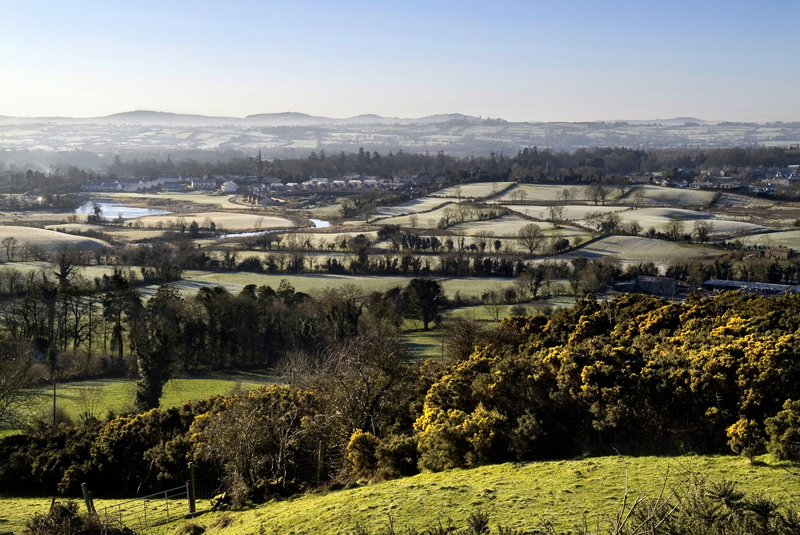 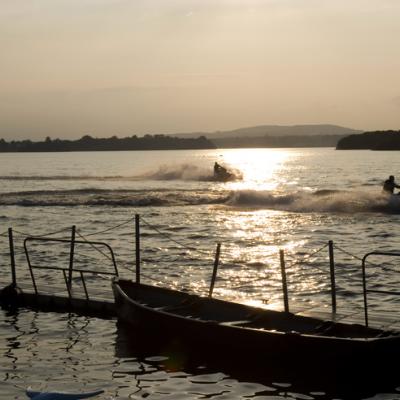 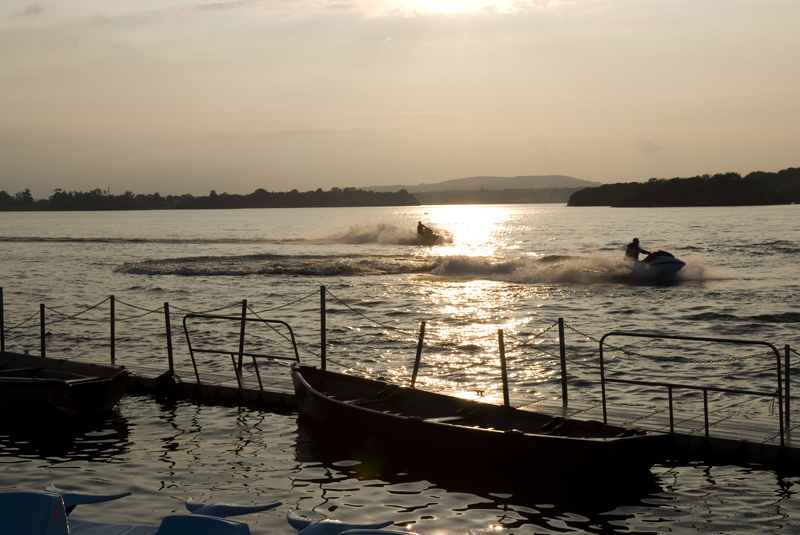 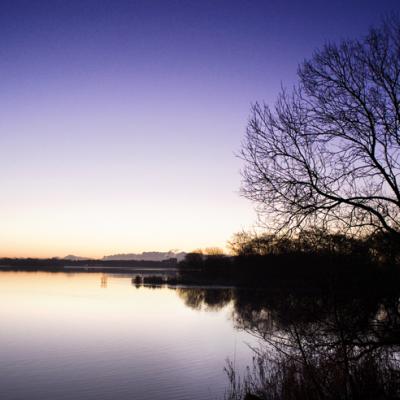 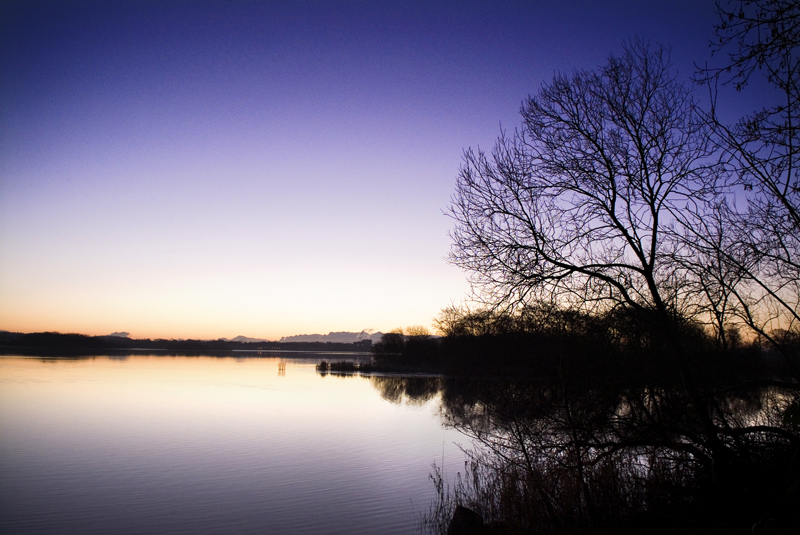 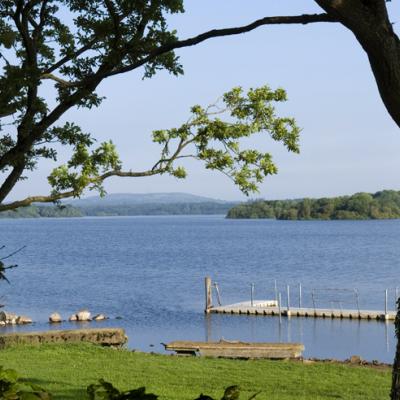 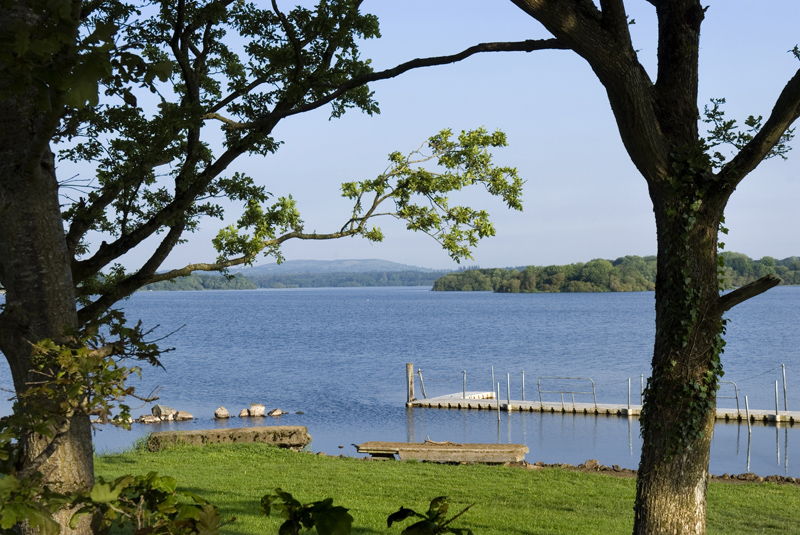 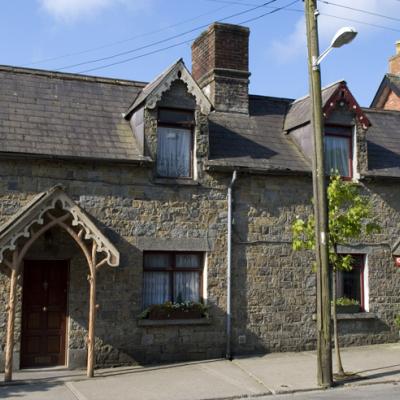 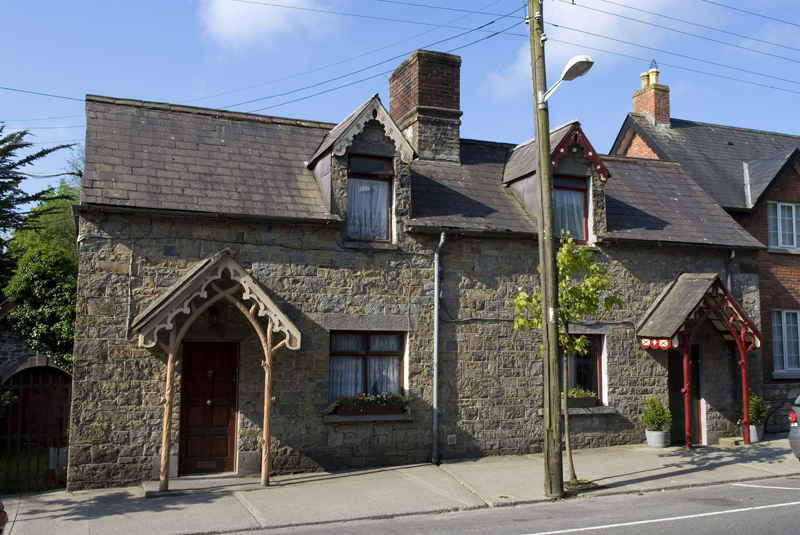 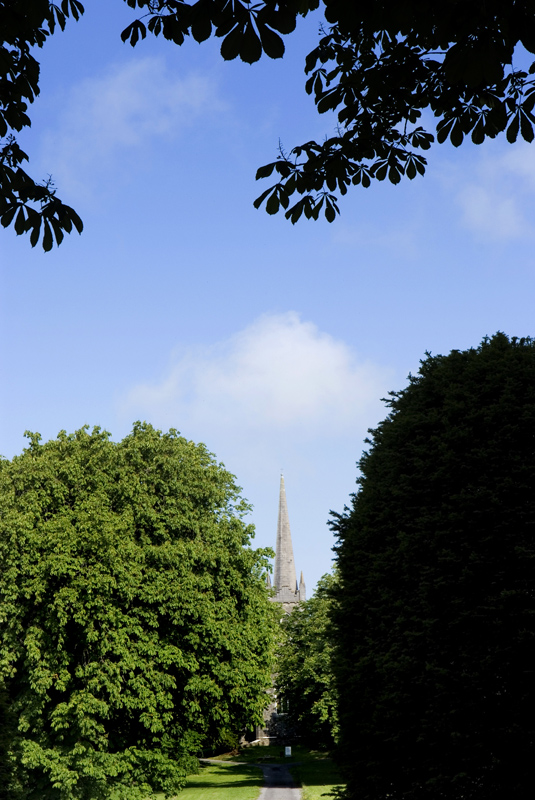 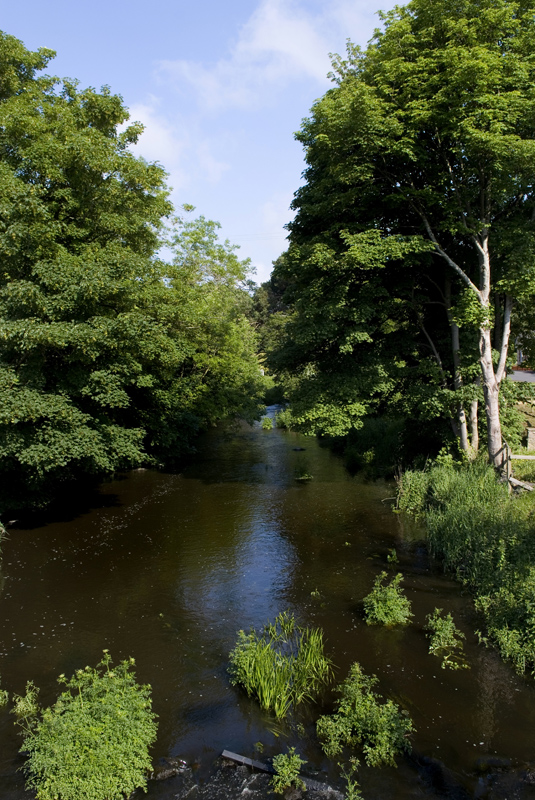 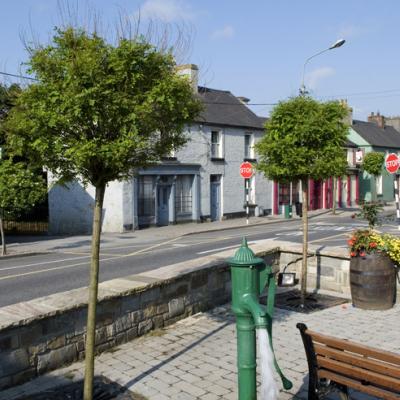 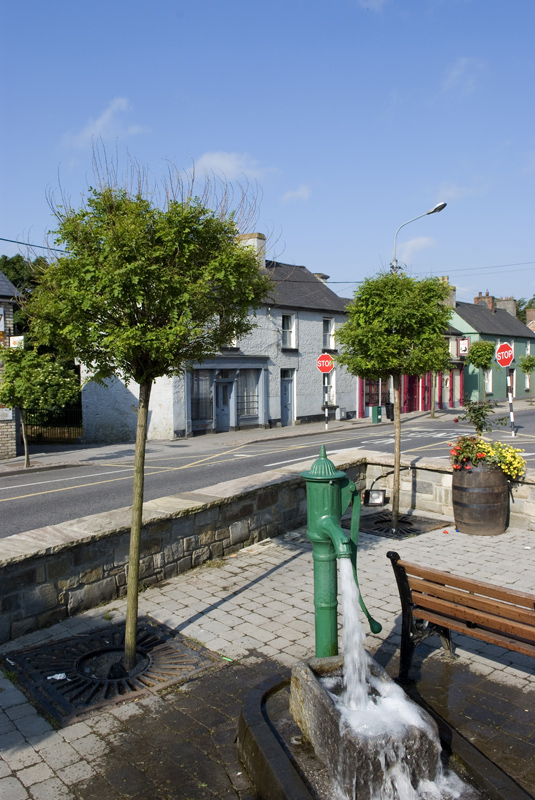 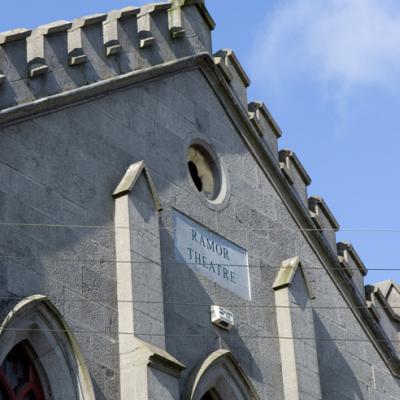 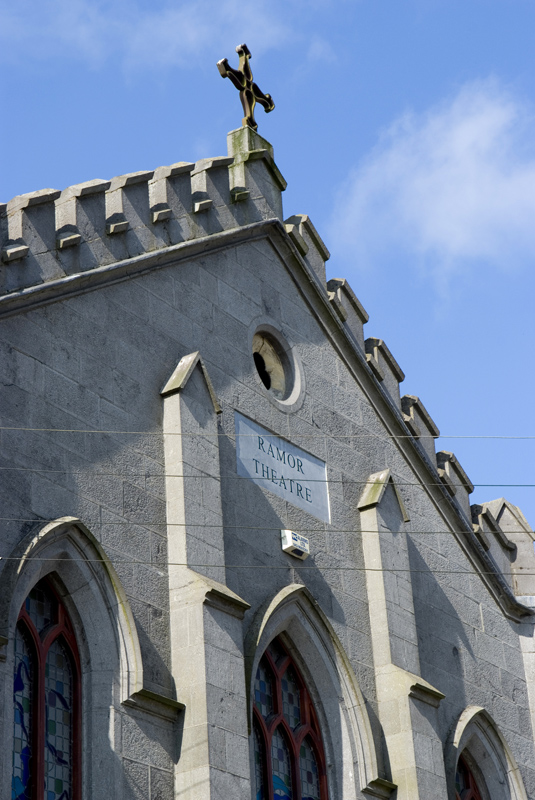 Virginia is very rich in history and archaeological heritage.

Lough Ramor was formed by the melting ice at the end of the last Ice Age approximately ten thousand years ago. The drumlins (deposits of sand in the shape of egg baskets) found throughout the area were formed under the glaciers at this time. The countryside has been inhabited for more than 5,000 years. Physical evidence of Virginia’s long history is scattered throughout the area - from drumlins, stone circles and megalithic tombs to castles and monastic ruins.

The Loughcrew Cairns, Oldcastle, County Meath (10mls.), a group of Neolithic passage tombs dating to 3,000-4,000BC are historically very important, and the views of nine counties from the main hill are spectacular, to say the least.

Saint Feidhlim founded Kilmore Cathedral, Cavan (still in use) and Saint Mogue founded an abbey at Drumlane, near Belturbet (in ruins) in the 6th century.

Saint Columba's (Colmcille’s) Church and Round Tower, Kells, (12mls.) stand on the site of an earlier Medieval church (11th or 12th century), which lay in partial ruins and was restored in 1578. The only remnant of that church is the Bell Tower. The interior of the church is rich Victorian Gothic. The stained glass is noteworthy. A facsimile of the Book of Kells (gospels copied by St. Colmcille and his monks) stands in the old baptistry. In the church grounds stand the remains of four Celtic Crosses and a Round Tower (used as a place of refuge for the monks and their precious possessions. Near the church stands stands a small rectangular building, consisting of an oratory. (St. Colmcille’s House).

The Viking raiders are likely to have sailed up the River Boyne from Drogheda, then up the River Blackwater to Lough Ramor where they confiscated a monastery on an island now called Woodward’s Island. They left behind a brooch typical of Viking style. It has been named the Virginia Brooch.

Ross Castle, Mountnugent (10mls.), a former Nugent stronghold built in the 1500s, is a well-restored style of Norman Castle, overlooking Lough Sheelin. It is rented out to tourists.

The Norman-Irish Plunkett family occupied Loughcrew House, Oldcastle, and estate until they were dispossessed by Cromwellain forces and their estate given to the Naper family in 1665. The most famous Plunkett to reside there was Saint Oliver, whose heroic defense of the Faith as Archbishop of Armagh led to his martyrdom and recent canonisation. His family home and church now lie in ruins. An open air mass is celebrated there each year on the first Sunday of July. The surrounding gardens, partly dating from the seventeenth century, are the venue for an opera each year. Opera de Carmen by George Bizet will be performed there on 29th and 30th June, followed by a Rhythm and Blues Festival on the 6th and 7th July this year.

The ruins of Crover Castle, built by Thomas O’Reilly, an Irish Chieftain in the late fourteenth century, are to be seen on Castle Island, Lough Sheelin, one of the premier trout fishing lakes of Europe (10mls,).

The foundations for many towns, including Virginia, were laid by the planters from England and Scotland in the seventeenth century. During the following century many fine houses, some of which are still standing, were built by the descendants of the planters. The Park Hotel, Virginia, built in the 1800s was formerly the hunting lodge of Lord Headfort, whose main residence at Kells, County Meath still stands and is now an exclusive, international, boarding school for the rich and famous.

Quilca House, Mullagh, the home of Thomas Sheridan, a clergyman, was visited by Jonathan Swift who is reputed to have written parts of Gulliver’s Travels there.

County Cavan Genealogical Research Centre, Cavan (20mls.), offers a full research service for people with Cavan ancestry. It contains a data base of births, deaths and marriages, census records and numerous other sources of a genealogical nature.

A wide range of sporting activities are available in the Virginia area of County Cavan: