The Scotch-Irish and New Orleans

From the middle of the 1700s people with roots in Ulster were settling in New Orleans. Others followed in the nineteenth century. Their names included Davidson, Johnston, Livingston, McCormick, McNair, Pollock, Porter, Ross and Scott, to name a few. Their contribution to the economic, religious and cultural life of the city often took place quietly and in the background – but occasionally it was enormous, transforming the city and saving it in times of war. This exhibition introduces you to some of the characters in that story.

The ‘Father of Black History’, Carter G. Woodson, often wrote warmly of his Scotch-Irish neighbours, describing them as a ‘God-fearing, Sabbath-keeping, covenant-adhering, liberty-loving and tyrant-hating race.’ This love of freedom is a regular theme in centuries of Scotch-Irish literature. Jackson Square is named for Andrew Jackson, whose parents were Scotch-Irish emigrants to America in the 1760s.
From Woodson’s essay ‘Freedom and Slavery in Appalachian America’, in The Journal of Negro History, April 1916 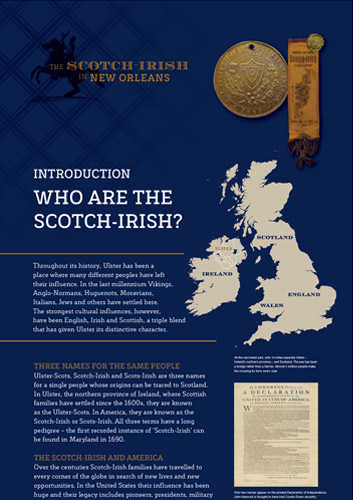 The Scotch-Irish in New Orleans - pdf

Ireland: An Island Of Cultural Variety

Throughout its history, Ulster, the northern province of Ireland, has been a place where many different peoples have left their influence. In the last millennium Vikings, Anglo-Normans, Huguenots, Moravians, Italians, Jews and many others have settled here. The strongest cultural influences, however, have been English, Irish and Scottish, a triple blend that has given Ulster its distinctive character.

Three Names For The Same People

The Scotch-Irish And America

Over the centuries Scotch-Irish families have travelled to every corner of the globe in search of new lives and new opportunities. In the United States their influence has been huge and their legacy includes pioneers, presidents, military commanders, religious leaders, educators, philanthropists and giants of industry and commerce.

From The ‘Eagle Wing’ To New Orleans

The Livingston family has been one of the most prominent and influential political families in American history. They descended from Rev. John Livingston, one of the earliest Presbyterian ministers in Ulster. In 1636, Livingston was one of the leaders of the first, though ultimately unsuccessful, attempt to establish a colony of Ulster Presbyterians in the New World on board a ship named Eagle Wing. John’s son Robert was the founder of the family in America, arriving in Boston in 1674. 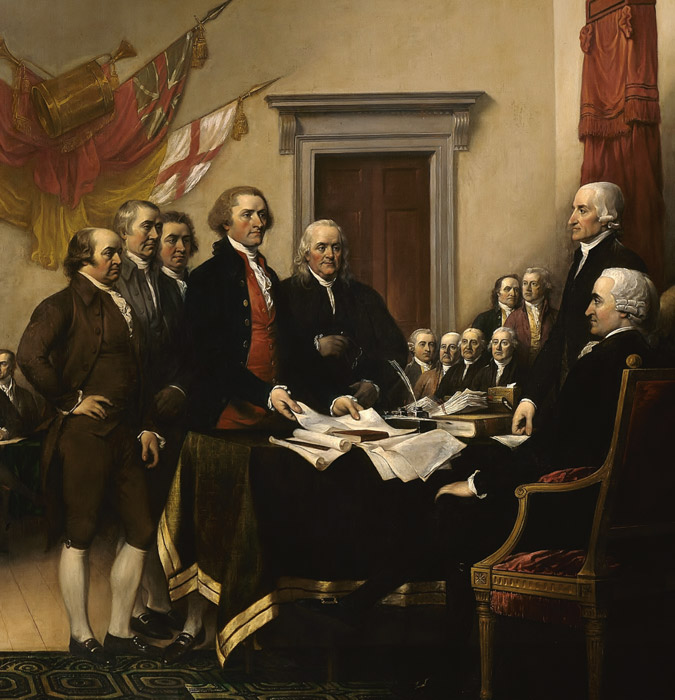 Robert R. Livingston was the great-great-grandson of Rev John Livingston. His sister Janet was married to General Richard Montgomery, originally from Convoy, County Donegal, who was killed at the Battle of Quebec in 1775 and is considered America’s first national hero. Robert Livingston was a member of the ‘Committee of Five’ that drafted the Declaration of Independence in 1776.

Livingston served as US Minister to France under President Thomas Jefferson from 1801 to 1804. During that time he negotiated the Louisiana Purchase, which doubled the size of the United States, signing the treaty with France on 30 April 1803.

Edward Livingston was the younger brother of Robert R. Livingston. A lawyer by profession, he represented New York in the House of Representatives, where he was an ally of Andrew Jackson.

In 1804 he moved to New Orleans, where he established a successful legal practice. During the War of 1812, Livingston helped to mobilise the diverse population of New Orleans in the defense of their city against the British. Livingston represented Louisiana in Congress, 1823–9, and in the US Senate, 1829-31. He served as US Secretary of State under Jackson from 1831 to 1833.

Another Livingston descendant, Robert Linlithgow (Bob) Livingston, served as a US Congressman from 1977 to 1999 for the same Congressional District in Louisiana held by Edward Livingston.

Robert R Livingston is in the middle of the ‘Committee of Five’ standing men – behind Franklin and Jefferson – depicted in John Trumbull’s famous painting Declaration of Independence. 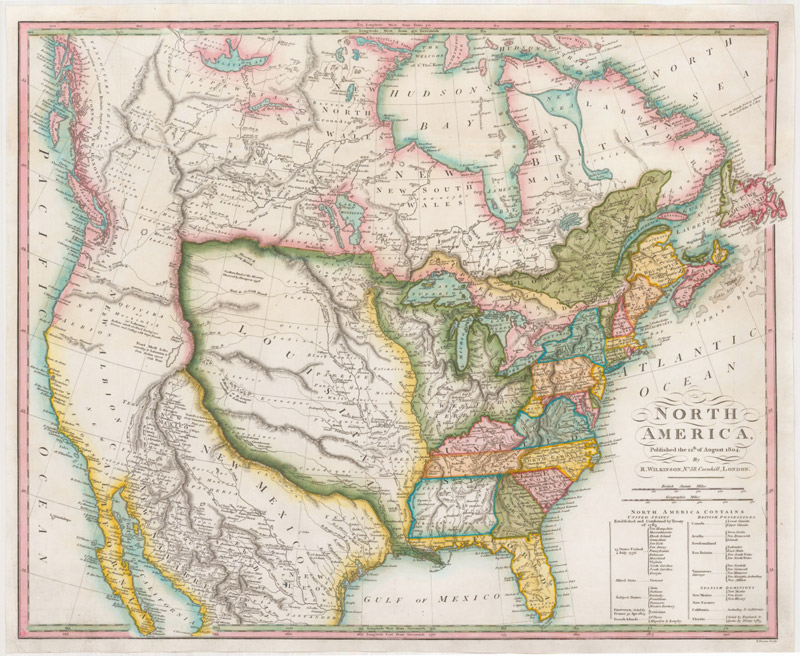 The earliest map of the Louisiana Purchase, 1804. 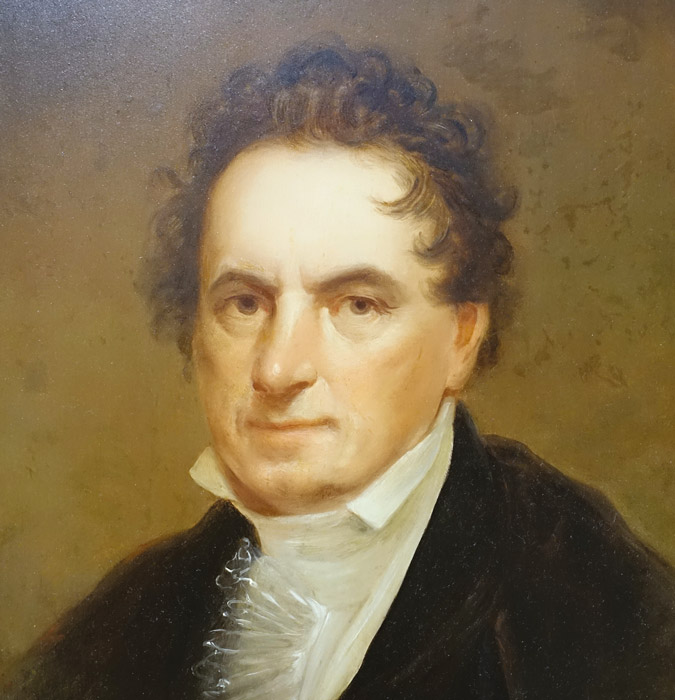 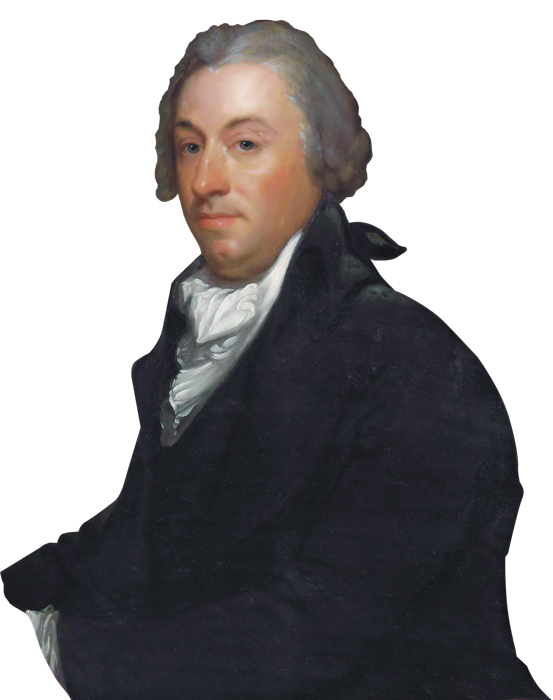 ‘We have lived long, but this is the noblest work of our whole lives. …  The United States take rank this day among the first powers of the world.’

The contribution of the Scotch-Irish to the Patriot cause in the years leading up to and including the American War of Independence was immense. The Secretary to the Continental Congress, three of the signatories of the Declaration of Independence and the printer of that famous document were all Ulster-born, as were two of George Washington’s closest associates during the war, Henry Knox and James McHenry.

Oliver Pollock is a largely forgotten figure in American history. Born in the Bready area of County Tyrone, he emigrated to America in 1760. Pollock became involved in business in Philadelphia, the Caribbean and eventually New Orleans where he moved in 1768. As a result of his commercial activities, he became of one of the wealthiest merchants in America.

Due a severe food crisis in New Orleans in 1769, Pollock came to the aid of the city’s inhabitants by importing grain and flour from Philadelphia. Rather than exploiting this situation to his own advantage, Pollock supplied these foodstuffs at half the going rate. He earned the thanks of the city’s inhabitants and was granted free trading rights within Louisiana Territory. 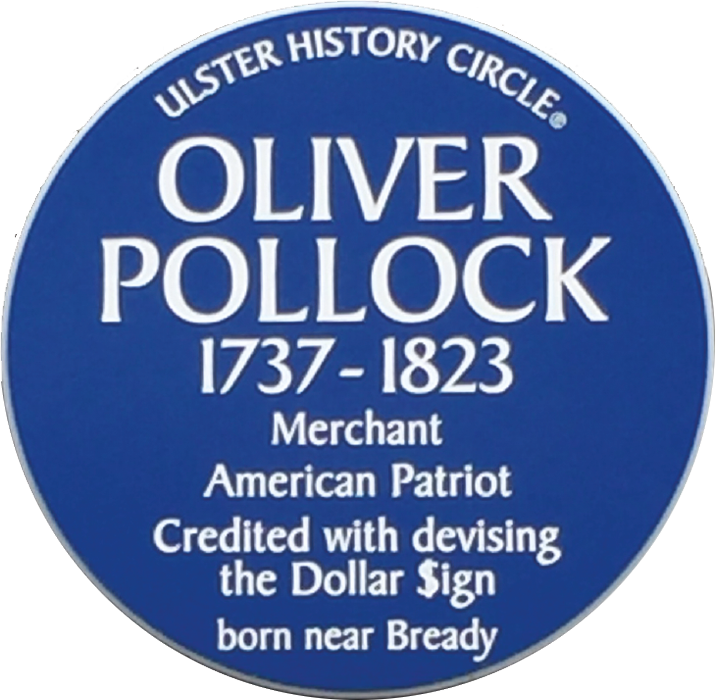 Support for The Patriots

Pollock used his wealth to finance the activities of the American revolutionaries in the Mississippi Valley, an important but little-known campaign. It is reckoned that he spent the modern equivalent of $1 billion of his own money on the war effort. Due to his generous support for the Patriot cause, he fell into debt and he spent some time in prison. Eventually, with the support of Thomas Jefferson, he recovered some of the money owed to him. Pollock died in Mississippi in 1823.

In addition to his many other achievements Pollock is credited with devising the dollar sign. It is said that in his business accounts he used an abbreviation of the peso, but his penmanship made it appear to be a transposing of the ‘p’ and the ‘s’. This was copied by others with whom Pollock did business and eventually became one of the world’s most recognisable symbols.

‘I have the honor to be with the most profound respect Your Excellency’s Most Obedient & Most Humble Servant’
Oliver Pollock in a letter to George Washington, 11 May 1788 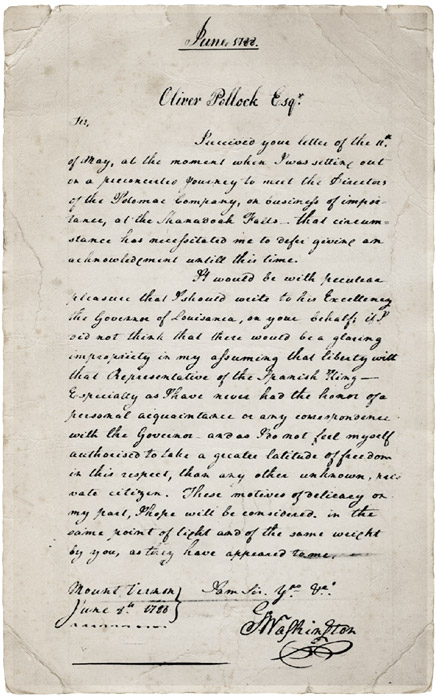 Letter from George Washington to Oliver Pollock, 1788 (Library of Congress). 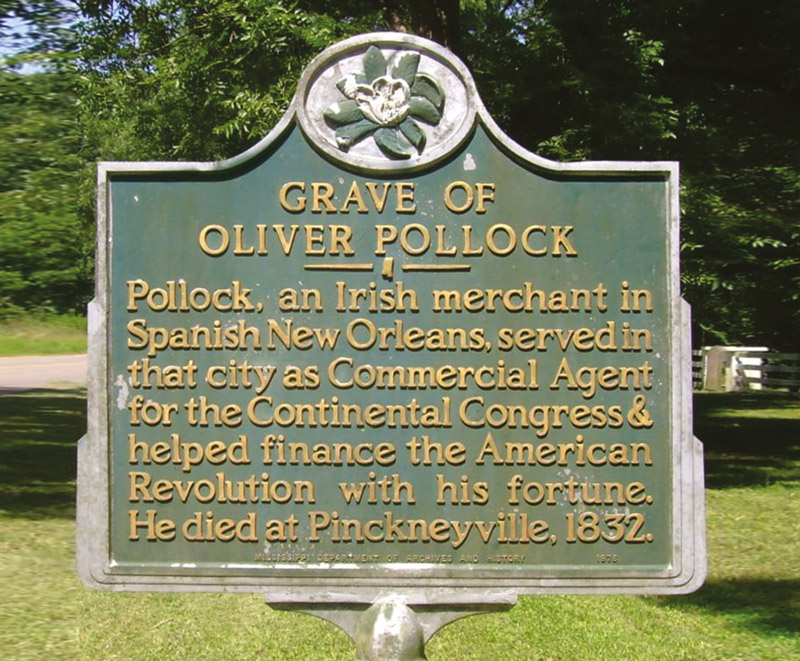 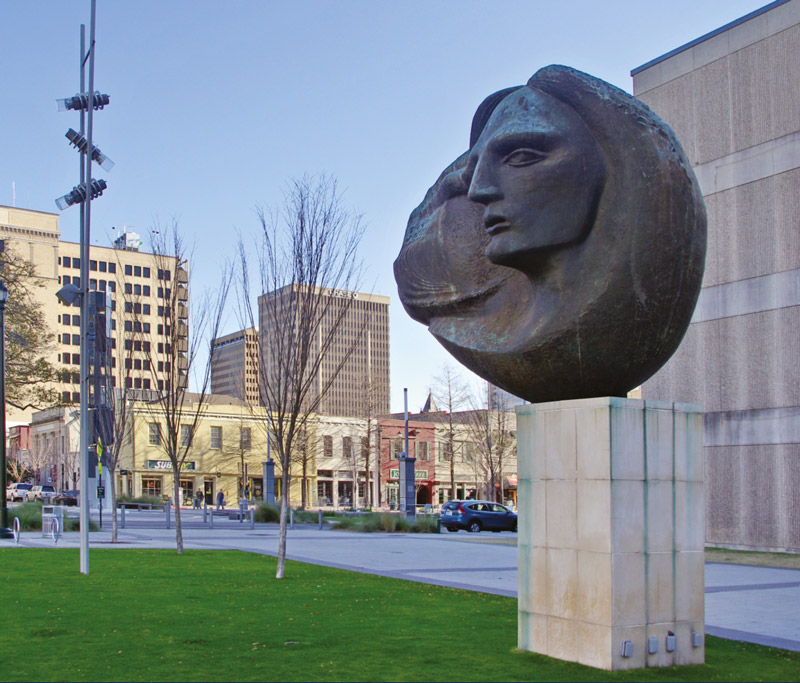 Oliver Pollock sculpture by Frank Hayden outside the Public Library of Baton Rouge. 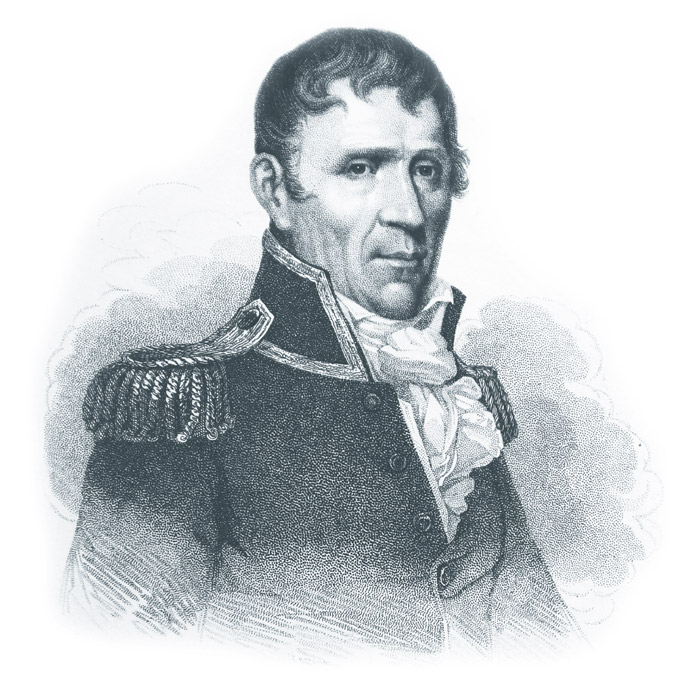 From The Backcountry to The Battle of New Orleans

Of the 44 men who have served as President of the United States, no fewer than 20 could claim Scotch-Irish roots. This includes all four first-generation Americans who have occupied the White House: Andrew Jackson, James Buchanan, Chester A. Arthur and Barack Obama.

Andrew Jackson’s parents left Carrickfergus, County Antrim, for America in 1765. Jackson’s father died shortly before he was born in 1767 and he was raised in modest circumstances in a Scotch-Irish community in the Waxhaws, on the border between North and South Carolina. Jackson went on to become a successful lawyer and businessman in Nashville, Tennessee.

During the War of 1812 Jackson earned a reputation as a determined and successful military commander and was nicknamed ‘Old Hickory’ on account of his toughness. His most famous victory was at the Battle of New Orleans in January 1815 when he defeated a much larger British force, with minimal casualties. Jackson’s diverse force included Tennesseans, Kentuckians, African-Americans, Native Americans and Creoles.

New Orleans has a connection to one of the most popular tourist attractions in Northern Ireland – the Ulster American Folk Park. The park was developed around the homestead of Thomas Mellon (1813–1908) who emigrated to America as a boy and went on to become a wealthy banker in Pittsburgh. Thomas’s uncle, also named Thomas Mellon, settled in New Orleans where he became a successful merchant and fought at the Battle of New Orleans in 1815.

‘The family from which General Andrew Jackson is descended were ... among the emigrants from Scotland to the province of Ulster. They were strict adherents to the Church of Scotland, and transmitted their religion, as well as their dialect, to their descendants of the present age.’
From Life of Andrew Jackson, by Amos Kendall, 1843. Kendall was one of Jackson’s ‘Kitchen Cabinet’. 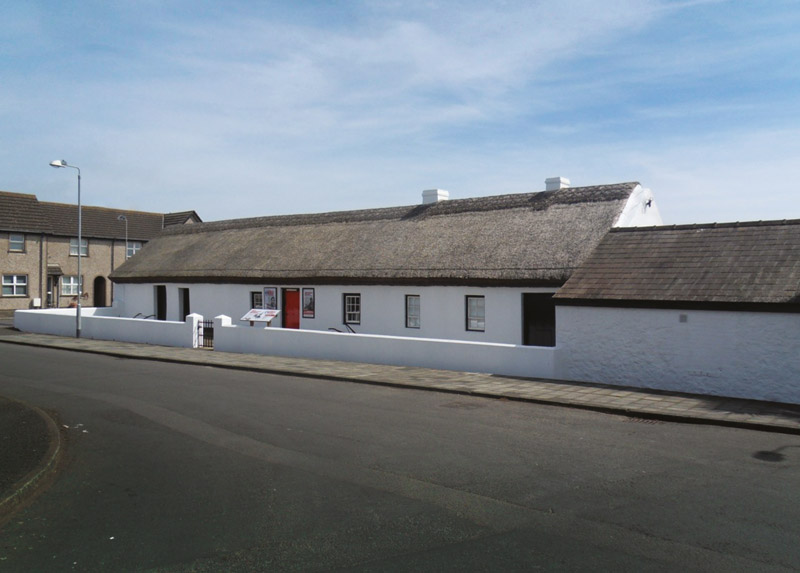 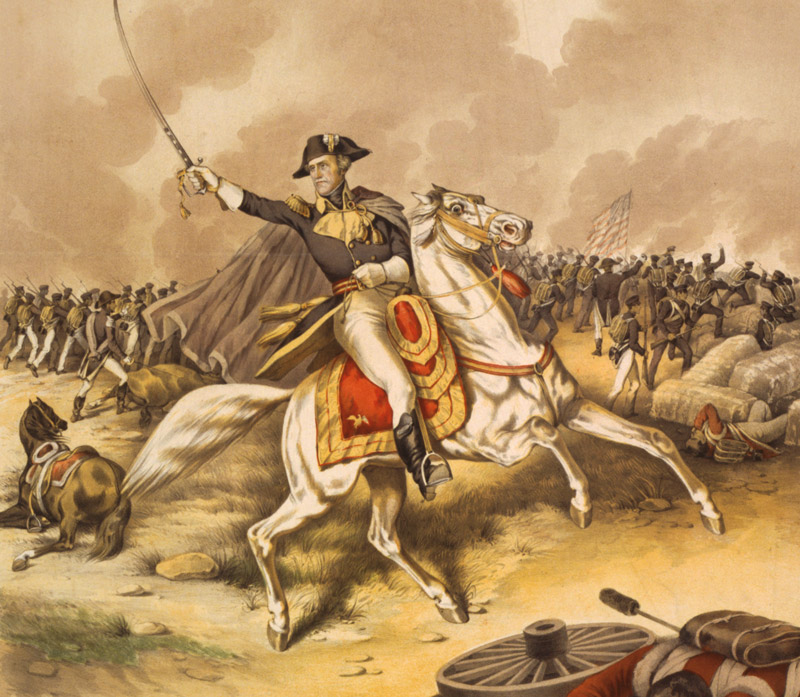 Jackson at the Battle of New Orleans (Library of Congress). 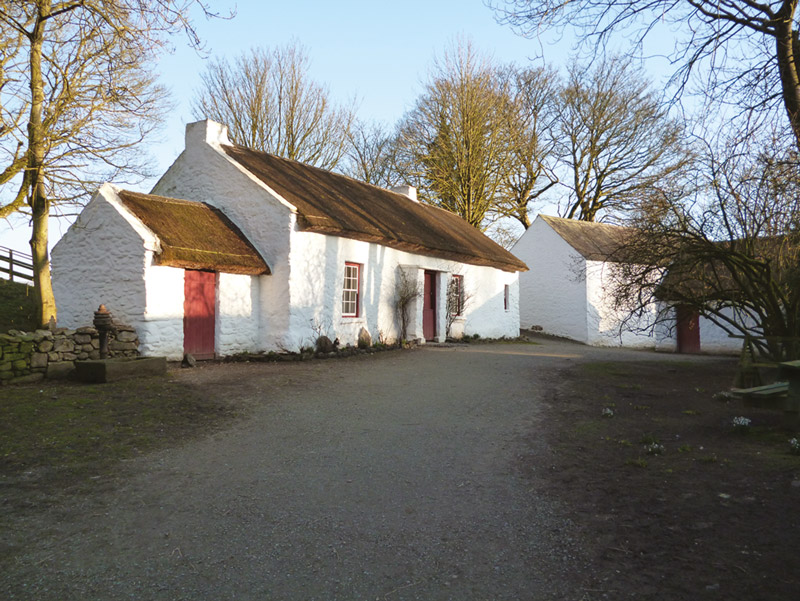 From Immigrant Orphan to US Senator

Individuals of Scotch-Irish background played a key role in the development of the institutions of government of the new United States, including the Constitution and Bill of Rights. In addition, numerous congressmen, senators, governors and other elected representatives in United States history have had Scotch-Irish roots.

For over 30 years Alexander Porter was the most high-profile Scotch-Irish citizen in Louisiana. He was the son of Rev. James Porter of Greyabbey, County Down, who was the only ordained Presbyterian minister to be executed in the aftermath of the 1798 Rebellion in Ireland. Following the rebellion, Alexander moved to Nashville, Tennessee, were his uncle was a prominent resident.

In 1809 Porter moved to Louisiana and began a legal practice in the Territory of Orleans. He became involved in politics and is considered to have been the key figure in the framing of the Louisiana constitution in 1812. He was a member of the Louisiana State Legislature from 1816 to 1818 and in 1821 became a judge on the state’s Supreme Court. He served as a Senator for Louisiana from 1833 to 1837. 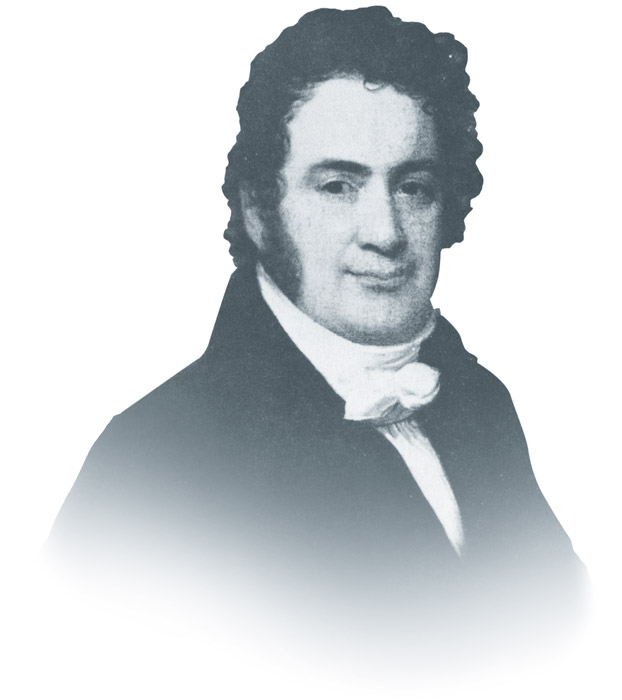 Porter’s home was a large plantation named Oaklawn Manor in St Mary’s Parish. He had a keen interest in horse-racing and imported thoroughbred racehorses from Europe. One visitor to his home afterwards wrote that all who stayed with Porter would ‘remember the warm Irish welcome and luxurious hospitality of its accomplished and talented master.’ Today the property is open to the public.

Though initially friends, Porter and Andrew Jackson later became political opponents. When Porter visited Europe in 1840 he made enquiries into Jackson’s family background. Although he could not establish anything beyond doubt, he returned to America convinced (though erroneously) that the former President had been born in Ireland.

‘He was a man of fine talents, amiable disposition, pleasant temper, benevolent heart, elegant taste and classical acquirements. His death is a grievous loss to the country.’
From Memoirs of John Quincy Adams 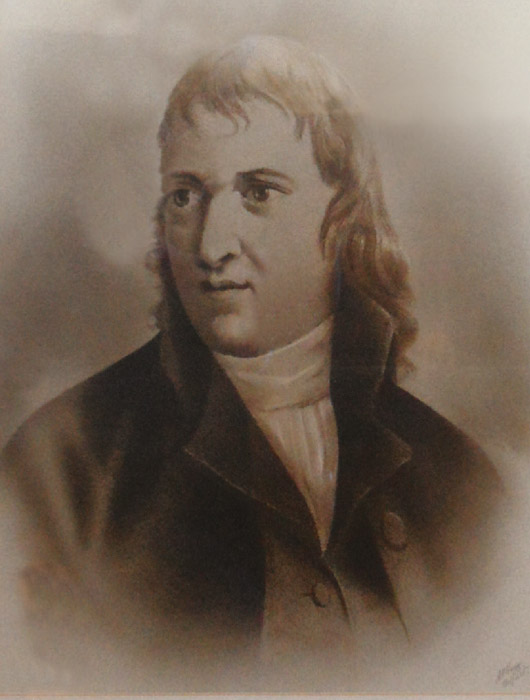 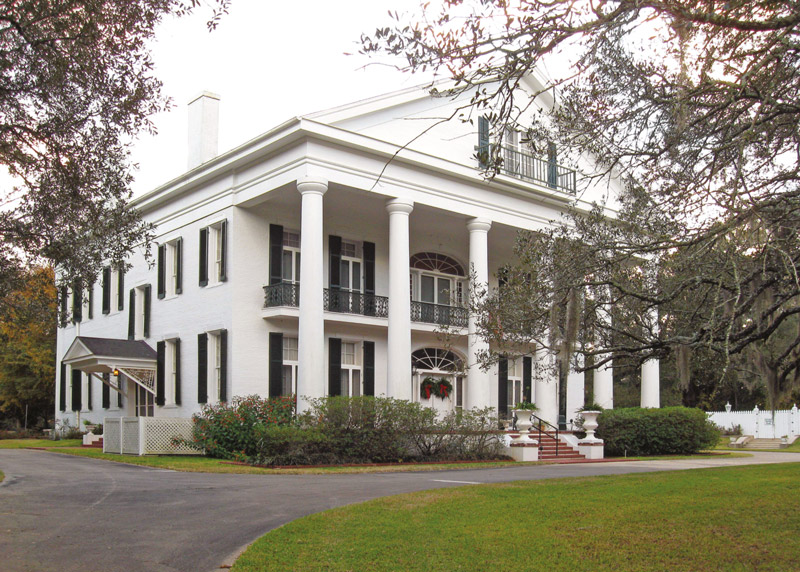 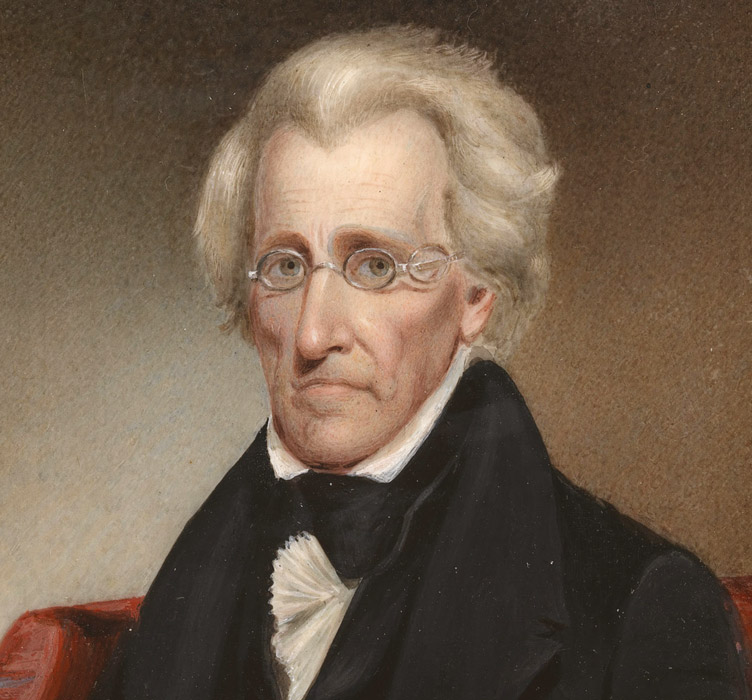